Due to a debilitating hang-over, Andy a Hornswood mate of mine made the fatal mistake of turning up to his daughter’s Under-15 soccer final just moments before the early-morning kickoff. So all the other dads of course, volunteered him to do the dreaded linesman duty.

Andy had run-the-line for his daughter’s Hornswood Soccer games many times and it wouldn’t normally bother him. However he’d been out on the piss with the lads and his head hurt like a hammer-hit thumb. But what choice did he have? The bastards had stitched him up royally.

It all went surprisingly well, despite Andy being constantly on the vomit-precipice he relaxed and started to enjoy the actually game. It was a thrilling 2-2 score-line with mere moments left and his daughter was having the game of her life as striker. They were playing a serious grudge match against a team that neither the parents nor the girls liked as they always took games too seriously and cheered obnoxiously (we don’t like that in Hornswood).

In the closing seconds of the match, one of the Hornswood backs made a desperation kick from well in their half. The ball flew all the way up to Andy’s daughter and she slammed home the winning goal!

The problem was, because she wasn’t actually expecting the ball at that moment his daughter was a MILE offside. So much so, that players on both sides had slowed their sprinting to prepare for the penalty.

With a hangover-exploding head, perched upon the vom-ipice and alcohol still coursing through his veins, Andy was in no condition to sprint. He was way down the line and actually missed his daughter’s offside completely. In fact, in his excitement he actually forgot it was even his job to call it. He had his flag tucked snuggly under his armpit while he applauded the winning goal.

The ref (who looked to be about thirteen) – “Was that goal good mister?”

Andy – “GOOD?? IT WAS FREAKEN GREAT!!” Andy punched the sky and the flag fell out of his armpit.

So, much to the surprise of his daughter’s team, their opposition and the opposition’s highly-animated supporters (and even the Hornswood parents), the ref paid the goal. Then he blew full-time. Hornswood had “won”.

Andy ran to the goal square, high-fived and hugged his daughter excitedly.

Then with a newfound spring Andy set off across the field to celebrate with the rest of the Hornswood parents. Walking past the gaggle of heart-broken opposition girls from whom he had unwittingly burgled the match, he heard comments thrown his way. Some irate, some teary.

“WHAT A CHEATER. THAT AWFUL GIRL WAS A MILE OFFSIDE.”

“I WONDER WHICH ONE IS HIS DAUGHTER.”

“HORNSWOOD ARE SUCH DIRTY CHEATERS.”

Thinking that was a bit rough and it wasn’t his fault his daughter had single-handedly beaten their old nemesis, he then walked past a large group of opposition dads, out of earshot of all the girls.

“YOU’VE GOTTA BE FUCKIN’ JOKIN’ MATE! YOU HAVE A FUCKIN’ BET ON OR SOMETHIN’?”

“DID YA HAVE YOUR FLAG UP YOUR ARSE PAL?”

“YOU DODGY? OR YOU JUST SHIT, MAN-BOOBS?”

Despite the hangover fog in his brain, Andy finally realised his error. And as a predominantly honourable man, he was mortified.

He decided he and his daughter should skip the team celebrations – of their hollow and undeserved victory, and just leave. Quickly.

As he was getting into his car, a slightly scary little old lady appeared. He smiled and Andy hoped he wasn’t about to cop some more abuse or plummet headlong off the vom-ipice, right in front of her.

Little old lady (yelling in a thick Middle-Eastern accent) – “YOU ROB MY GRAN’DAUGHTER HER FOO’BALL!!” Andy just stood there. “YOU NO GOOD MAN. YOU LIE WIZ ZHE GOATS.”

One of the angry opposition dads (yelling from the sideline to the little old lady) – “JUST LEAVE HIM MAMA. HE’S JUST A DIRTY CHEAT.”

She waved her hands, witchingly, right in his face. Freaked out, all Andy could do was close his door and drive away.

In his rear vision mirror, he could still see her gesticulating, spitting on the ground and yelling.

Anyway, the next day Andy and Samantha, were with my lovely wife and I in a fancy-ish restaurant in Hornswood having a great night. An hour earlier he’d finished recounting the story of how he unwittingly gave his daughter’s team an exceedingly hollow, finals victory and an elderly lady had loudly accused him of goat… relations. 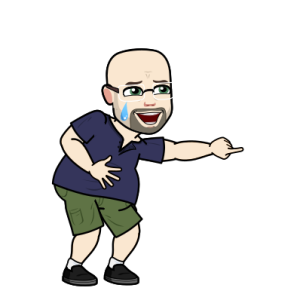 I reacted as you’d expect.

Feeling a… presence on his shoulder, Andy turned and there standing next to him was the old lady! Andy froze. He felt as though his heart had stopped beating. He knew what was coming. In reflex, he threw back the final mouthful of Verve in the bottom of his glass. There was more in there than he anticipated, his eyes watered and he coughed.

Little old Middle-Eastern lady – “YOU REMEMBER ME MISTER. YOU ROB MY GRAN’DAUGHTER.”

Andy just nodded, scared. Really scared. Nobody in Hornswood makes a scene in a restaurant, it’s unseemly! He looked to me for support, I did my best to suppress laughter.

But much to his relief, this time she appeared calmer and seemingly had gotten over her bitter disappointment, somewhat.

She smiled, turned and left.

Andy much relieved, commenced breathing once again. Sweating but smiling, he started to explain that she was THE little old lady so we’d understand why he was so obviously terrified.

Our laughter, let him know that we had already worked it out.

Then Samantha noticed a piece of paper on his bread plate, folded many times, into a thick little rectangle.

Andy opened it up carefully (see below) – 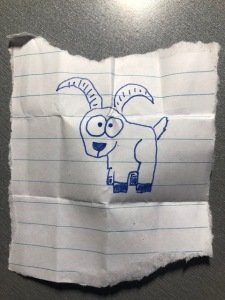 Thanks for reading. I write blogs oftentimes just to claim at parties much to my wife’s chagrin, that I am in fact… a writer. If you could Share far and wide via the buttons below, that would be amazing. I need to one day be a famous contributor to the noble art, of blogging. And check out my new craft beer business I set up with a few North Shore dads (gettincrafty.com.au) Cheers

2 thoughts on “LINESMAN FOR DAUGHTER’S SOCCER – Plunged into hell”