I’m not saying my son Jake was a great Rugby player (I say “was”, because after three broken noses and three shoulder dislocations he’s now retired). He was neither overly big compared to the behemoths he often played, nor particularly fast. Being a leftie, his pass to the right definitely lacked that certain something and he couldn’t kick to save his life.

But like all Flankers he was tenacious, tough, a great tackler and the saying – flankers put their heads where other people wouldn’t put their feet, is apt.

Being young for his year, at high school in the early ages much to his chagrin, he was forced to play with the guys in the age-group below. So his performances did stand out a bit, he was captain and often the best player.

Once, when Jake was about twelve or thirteen we had arrived for a MASSIVE game against Joeys and he’d left his mouth-guard at home! You’re not allowed to play without one, but he said he could borrow and ran off to warm up with the team. We saw an old friend Sarah, whose son Tommy was one of Jake’s great mates through primary school and was now the gigantic guy in the opposition team.

Me (with a knowing smile) – “Oh we’ll see Sare, because Jake’s specialty is taking down the big guy.”

She hesitated and look of horror came over her face in an instant. 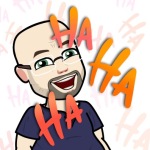 Me (looking around jokingly and laughing) – “JAKE. THE KNEES.”

So my wife stayed chatting to Sarah while I went to the other side of the ground where there were less people.

The game was a torrid affair, as it always is against the opposition school’s juggernaut and Jake was having a top match. Just after half-time, three women came over to where I was on the side-line and stood uncomfortably close to me. They looked like sisters.

Sister 1 – “I’m Robert’s mum. You Jake’s dad?” She sounded like a country woman who was a bit pissed off.

Sister 2 (with no introduction) – “WE’VE COME ALL THE WAY FROM TAMWORTH TO WATCH ROBERT PLAY. I BET YOU DIDN’T COME FREAKEN FAR!”

I was taken aback by the agro tone.

Me – “Only Lindfield.” I smiled warmly.

Angry Sister 1 – “TAMWORTH IS A GODDAMN LONG TRIP WHEN YOU DON’T GET TO SEE YOUR SON PLAY! MY HUSBAND ONLY GETS TO SEE A FEW GAMES A YEAR, AND NOW HE’S HAD TO GO AND WATCH THE YOUNGER BOY PLAY, BECAUSE ROBERT’S ON THE SIDELINE. A-HOLE.”

Angry Sister 3 – “LONG TRIP, TO BE STANDING ON THE SIDE-LINE… TALKING TO AN IDIOT.”

Angry Sister 3 – “HAVE YOU NOTICED HOW WELL ROBERT’S PLAYING JASE?”

She put such venom and a little spittle into the Jase, that I became… scared.

Angry Sister 2 (cutting me off) – “THERE.” She pointed to the lanky kid in full Shore footy gear, cheering on the other sideline. Then it dawned on me, standing by myself, they must think I’m the coach and responsible for sidelining Robert.

Angry Sister 1 (interupting) – “YOU’RE TOO MUCH OF A IDIOT TO BE THE COACH.”

Then I thought I must have met the Tamworth sisters before, offended them in some way and they have got a better memory than me.

Angry Sister 2 – “NO WE HAVEN’T. YOU’RE LUCKY OUR HUSBANDS ARE UP WATCHING PHILLIP PLAY, SMART-MOUTH.”

I pretended I was following the play and wandered away from them, cheering.

Me (watching them out of the corner of my eye) – “COME ON LADS.”

They didn’t fall for it. They followed.

Angry Sister 1 – “YOU NORTH SHORE DADS A SUCH TOSSERS. THINKING YOU’RE BETTER THAN US COUNTRY PEOPLE. WELL YOU NOT!”

Me – “I have to… go… over there and…” I pointed at nothing in particular and sprint-walked all the way around to the other side of the ground. And I’m not known for my sprint-walking.

I spent the rest of the match keeping the entire oval, between me and the Tamworth-certifiable-sisters. If they moved anywhere, I moved in the opposite direction. It was like a big game of chasings. Luckily they had no more stamina than I did.

At the end of the match, they at least had the civility to stand quietly while the coach addressed the kids in team. All the time giving me the old stink-eye and adding to my puzzlement.

As we prepared to leave, the Tamworth-certifiables had one last go. A bit quieter this time, due to the boys.

She sure knew how to hurt.

I turned and spoke quietly to Jake, while the certifiables, stared daggers at me.

Me – “Jake, who the hell is Robert? His mum and aunties are up me big time for some reason.”

Jake (digging through his sports-bag) – “Oh, the coach told Robert he couldn’t play this week for missing practice again, and he didn’t want to let his parents know. He came in full footy gear to the game. It worked out perfectly because I used his mouth-guard and we told his parents that you said as Captain, I should take his, so that’s why he couldn’t play.”

Me – “Oh of course. I should have thought of that. Thanks a million son.”

Jake then pulls his “lost” mouth-guard out of his bag and announces smiling, at the top of his voice – “I FOUND MY MOUTHGUARD. IT WAS IN MY BAG ALL ALONG.”

I couldn’t help myself, they did call me fat after all.

Thanks for reading. I write blogs oftentimes just to claim at parties much to my wife’s chagrin, that I am in fact… a writer. If you could Share far and wide via the buttons below, that would be amazing. I need to one day be a famous contributor to the noble art, of blogging. And check out my new craft beer business I set up with a few North Shore dads (gettincrafty.com.au) Cheers